With special guest, Ross Middleham from the Met Office

For episode 3 of the Sharing Social podcast, Base Creative and ContentCal collaborated to interview the Content & Social Lead at the Met Office, Ross Middleham, and discuss using social media effectively and managing a global audience on TikTok.

Ross leads design and video production, and is responsible for the overall visual brand, to ensure the Met Office creates engaging, informative and high-quality communication to its followers. He oversees the day-to-day creation and publishing efforts, joining up ideas and setting the direction for the Met Office social channels, which boast over 1.6 million combined followers!

We’re taking a deep dive into some of the biggest learnings from our interview with Ross, including how a global organisation like the Met Office uses social media effectively.

When did social media start to become a priority for the Met Office?

Social media evolves all the time, and that ties directly into the Met Office’s values. To begin with, the Met Office wanted to make their existing content more engaging. This started with the use of infographics and then progressed into “scrollytelling”.

Scrollytelling is a term used to describe online experiences including animation, video, and sound effects, all triggered by the user scrolling.

This kicked off the start of social media taking a front seat at the Met Office. It works so well because it’s something we all use every day – very convenient when you want to share the latest weather updates!

How do the Met Office’s social media channels rank alongside other digital content channels?

When Ross joined the Met Office 12 years ago, his main focus was the website. Of course, over the past decade, social media has evolved massively, becoming the first place many turn to for information, so the Met Office’s strategy has also evolved to include social media too.

Today, social media ranks highly alongside other digital content channels for the Met Office because it’s such an easy way of accessing their audience.

However, part of the challenge with using social media is learning how people communicate, and how this varies across different channels, so the next step for the Met Office is to work out how they can communicate with their audience, in the same way, to ensure that content is received well and meets the desired objectives.

What’s the distribution of followers across platforms?

Why are the Met Office on all platforms? Because part of their purpose is to inform everyone on upcoming weather conditions and keep everyone safe. Different channels offer different values to different audiences, so covering all bases here means they’re able to reach a wide audience, who like to consume their content in different ways.

Twitter is currently the Met Office’s biggest platform, as it’s been used by the company for the longest time and now has over 800,000 followers alone. This is used much like a rolling news channel, which suits the ever-changing nature of the weather perfectly!

Here’s a quote from Ross:

We often hark back to the days when just people got their forecast on TV or the radio, particularly if there’s anyone who remembers the infamous 1987 storm and the fact that we didn’t think there was a hurricane coming on as the BBC presenter, Michael Fish, said there wasn’t. If that had been happening now, you’d have had an update 10 minutes later. You could have gone straight to the app, you could have gone to the website, you would have seen all of the uncertainty that surrounded that forecast. And actually, that’s what we’re able to offer, we’re able to offer people an avenue to understand how the weather and climate will impact them around the clock when it matters to them the most.

Did you know you can also tweet the Met Office with a location and you’ll get a reply with the local weather forecast? Pretty cool! Give it a go and tweet @metoffice

How did the Met Office begin a partnership with TikTok?

The Met Office realised during TikTok’s early stages that there was a buzz around the platform, and that it was important to look ahead at what was coming next. The way people communicate changes all the time, so it’s important for organisations to adapt and grow to keep up with this.

At first, the Met Office started experimenting on the platform when it was a low-risk strategy – no one actually knew they were posting there yet.

Some of the initial content hooks in the early days revolved around the current weather, or what the temperature was going to look like in the next few days. However, this wasn’t really getting the traction they wanted.

So, at the start of lockdown, the Met Office started looking at their publishing schedule to work out how they could align themselves with some of the new verticals TikTok was investing in, as one of them was education.

The Met Office quickly discovered that there was an opportunity here, and keeping people up to date and informed aligned closely with their purpose, so the Met Office got in contact with TikTok and the partnership was born!

What’s it like managing a community at such a grand scale?

During the interview, we asked Ross what it’s like having to not only keep on top of all the comments that come through social media, but also what people are saying on social media about the Met Office.

Here’s a snippet from Ross:

We’re working nonstop, this is very reactive, and we’re continually creating output. And so stopping and understanding what’s resonating best with people is tricky and requires specialist skills. For a team of content creators, content producers, that’s not necessarily their background. So this produces a huge opportunity for us in terms of growth over the next six months when we can focus on some of these challenges.

We understand that we’re a trusted name, and that people come to us in times of severe weather, because they know that they’re going to get the most accurate information. And that people are taking action, even on channels like TikTok. So we get people commenting saying that they’ve told their mum that there’s a storm on the way so that they’re going to need to be taken to school in the morning, or that they need to bring the rabbit in because actually, it’s gonna be really rainy overnight, or that they’re going to download a load of Netflix stuff because the power might go out. Like people are taking action based on our advice. So they’re understanding the content and taking the appropriate action. So we’re ticking a big box in that sense.

Listen to the full interview we had with Ross to learn more about the ins and outs of The Met Office’s social media strategy. Including a deep dive on breakthrough formats such as Instagram Reels and YouTube shorts.

There’s more where that came from

With special guest, Anita Veszeli from Ericsson This month Base Creative and ContentCal collaborated to interview the Director of Social Media and Advocacy at Ericsson, Anita Veszeli. Ericsson is one of the leading providers of Information and Communication Technology around the world. In this episode, we discuss social listening – what it’s for, how it […] 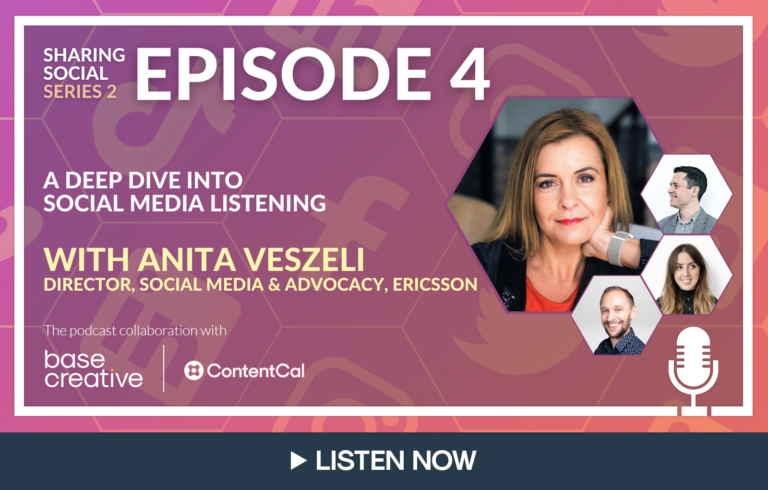 With special guest, Kelsey Nebbeling, Reckitt This month on the Sharing Social podcast, Base Creative and ContentCal joined forces once again to interview the Social Media Senior Manager of Reckitt, the company behind some of the world’s most recognisable and trusted consumer brands in hygiene, health and nutrition. Meet Kelsey Nebbeling. She leads on the […] 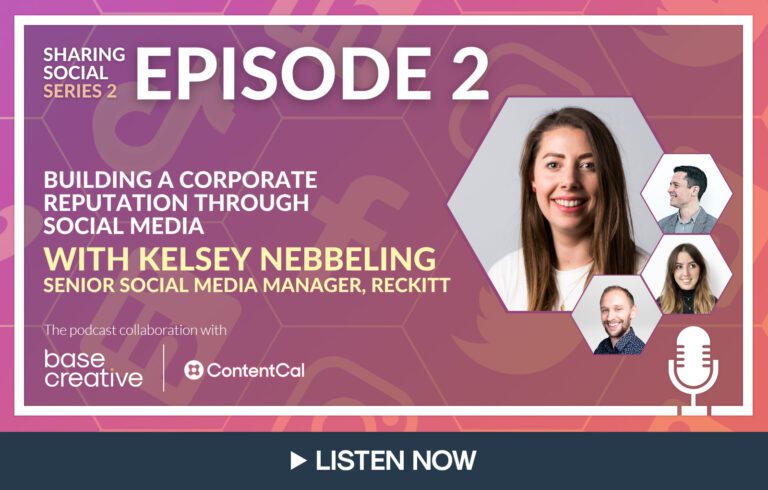 With special guest, Nada Alkutbi from IBM This is Sharing Social, the monthly show where we talk about all things social media! Video, TikTok, influencer marketing, personal branding, Facebook ads, social listening – the list goes on! For this series, we’re delighted to announce our collaboration with ContentCal! Each month the Iain Scott and Rebecca […] 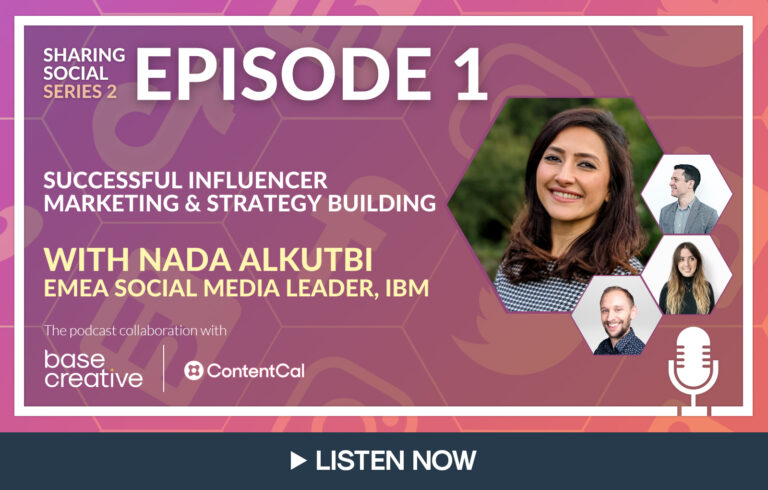 How to run successful video ads on social media [S1E5]

With special guest, Will Bonaddio from Electric House This is Sharing Social, the monthly show where we talk about all things social media! Video, TikTok, influencer marketing, personal branding, Facebook ads, social listening – the list goes on! In this episode, we sit down with Will Bonaddio to discuss running successful video ads on social […]